Bura – wind with two faces
Bura is a wind with two faces – nice and ugly. It is characteristic of the eastern Adriatic coast where it is especially severe on the Kvarner bay and islands because of the proximity of the mountain barrier Velebit and the mountains in the hinterland of the Bay of Rijeka and the Vinodol Channel. The mentioned mountains have a significant influence on the air mass flow and the formation of bura wind. Partial deforestation of the Kvarner islands, including the island of Cres, is to a large extent attributed to the action of this wind (Figures 1 and 4) 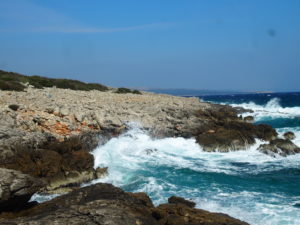 Bura (bora) usually brings dry, clear and cold weather, and, which is interesting, for people brings along a good mood (as opposed to the south wind sirocco, causing a dark, depressive and rainy weather). On the other hand, every visitor to the eastern Adriatic coast should be warned of the bad temper of bura wind. Especially the strong bura is disastrous for sailors because it blowss unevenly and unpredictably with occasional strong gusts (“reful”). Gusts strike the wave crests and the “sea smog” or “sea dust” is raised, which the bura brings to the shore’s mainland, where it is detrimental to the delicate vegetation.

The signs of the bura are “bura clouds” over Mt Učka and over the tops of Velebit, but also bent trees and stunt bushes point to places in the landscape of the island where the bura blows with a special strength and frequency. In some places on the island of Cres, the crowns of some bushy trees are bent in the direction of the bura wind can be seen. Some types of vegetation are particularly characteristic for places exposed to bura. In the southern part of the island of Cres one can found interesting examples of individual trees with lushly grown crowns up to the height of the drywalls and then sharply cut as with knife (Fig. 2). It can be assumed that such a form is just a result of bura wind blowing, and the drywall is shelter from salt spray. By measuring the angle of the tree trunks, the strength of the bora can be estimated at certain sites (Fig. 3). 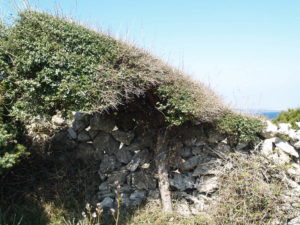 Fig. 2. The crown of the tree growing in the shelter of the drywall on the coast of southern Cres (photo: M. Randić) 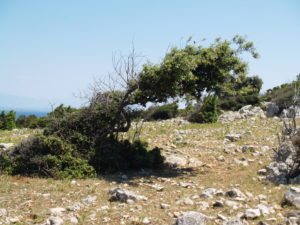 It is interesting that the arrangement of settlements and some important economy branches of the island of Cres, such as olive growing, have long been adapted to the local conditions of the climate, which is largely modified by bura wind blowing. For example, the olives are traditionally grown on the western side of the island, and only exceptionally in the eastern, where the influence of the bra wind is stronger. Such a spatial pattern follows the largest number of settlements on the island. 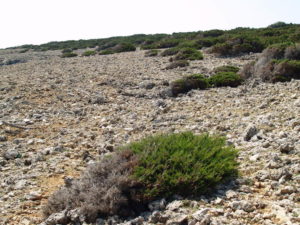 Fig. 4. Coast of the southern Cres: visible “wiped” barren space on the seashore and “broken” line of resistant bushes. The Juniperus phoenicea bushes are stunted on the side which is most exposed to direct shocks of the bora wind and salt spray (photo: M. Randić)