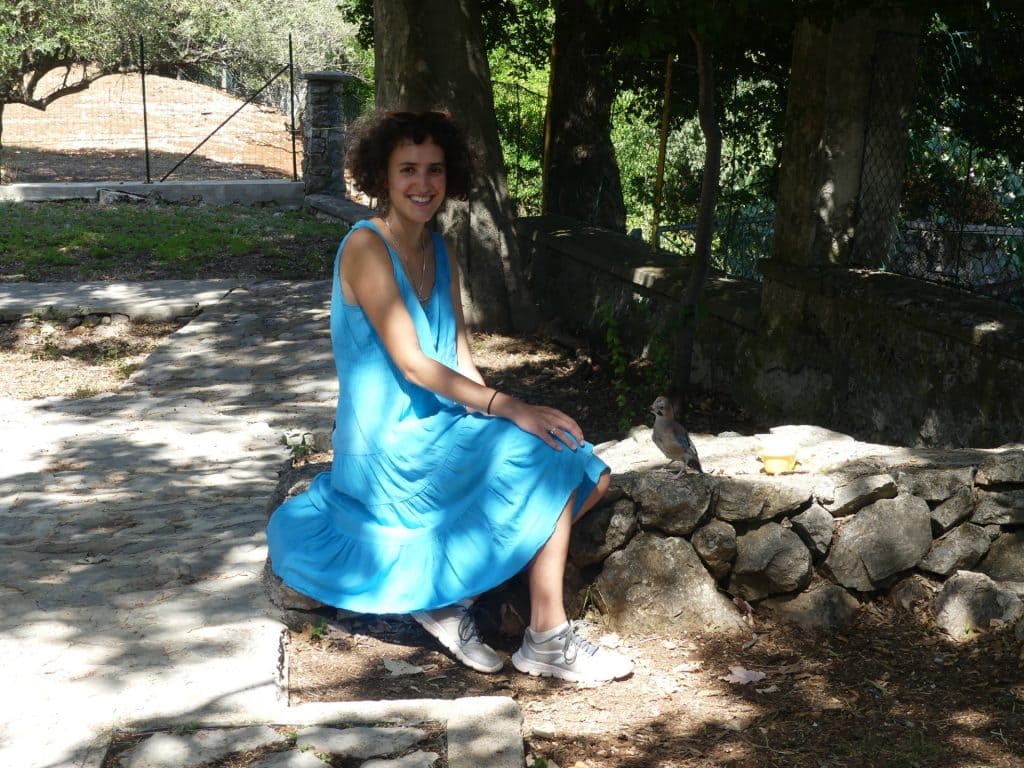 Hello! My name is Aida, I am from Spain and today I stand in front of my keyboard to share my experience as a volunteer at Beli Visitor Centre and Rescue Centre for Griffon Vultures. I am not the first volunteer introducing myself here, nor the first talking about what it is like to be at Beli. However, as a musician once said: old stories, when retold, become new. And since I am about to tell you an old story, the least I can do is try to offer a new perspective to it. Let’s carry out an experiment – try to remember your day up until now. What comes to your mind? I bet, above all, images. Then, maybe some sounds. Finally, flavours and smells (perhaps a bit of touch). Usually, we are not aware of scents that surround us, or at least not in a conscious way. We humans rely mostly on visual inputs, and there is nothing wrong with that, it is just the way we evolved. Still, the scents around us play a strong role in the way we feel, how we remember an experience or even if we remember it at all! (It has probably happened to you that a certain smell will bring you some long forgotten memory.) And if something will stay with me from my journey in Beli… Well, it is the lovely smell of roses, cinnamon and lilies of the valley that I felt. Spoiler alert: this text contains sarcasm. 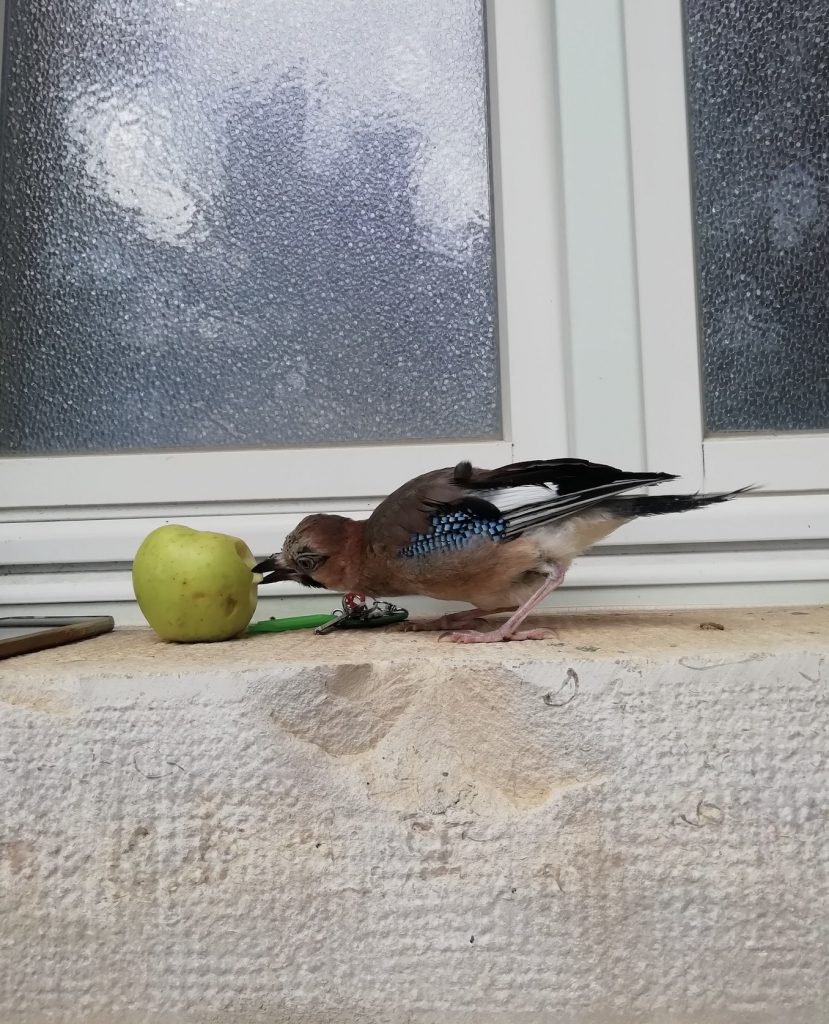 Nonetheless, the first odours I remember of my arrival to the island of Cres have their place in the ferry trip my colleague and I took from the island of Krk. Our sweat running after the long bus drive from Zagreb at the end of July, carrying big backpacks and a tenor saxophone, the smell of the bijela kava I ordered (“bijela kava is for kids before going to bed”, the bartender told me), the stink of gasoline and dirty water at Merag port, mixed with a breeze of fresh air. The night had almost fallen when we finally arrived to Beli, and we were tired yet excited, wondering how that dim landscape would look like under the morning light. From one of the windows, we could see the aviary, just in the backyard of the house, with eight rescued vultures. At last, we went to sleep.

The morning brought us the beautiful sight of Beli, on top the hill, like a watchman of the sea below. I heard the soft ring of the bell that hangs on the patio’s entrance, and I saw a man who did not look at all like I imagined entering with a little dark dog under his arm – Tomi (Beli’s worker and our supervisor) and Lu (Tomi’s friendly dog). We went down. The air was smelling clean and humid, with the hovering promise of a very hot day. We met the staff, explored the three exhibitions of the museum and finally took a peek inside the aviary, where the rescued vultures are, as well as their food – sheep carcasses, laying on a concrete platform, giving me the feeling of being in sacrificial grounds. As the days went by, I realized that guests were often more curious about the sheep than the actual vultures: where do they come from? (slaughterhouse), are they alive when you put them inside? (no, the vultures feed only on carcasses), do you have to kill them by yourselves? (no, but we do have to drag them inside and deal with sturdy limbs that do not want to cooperate). In a certain way, I understand this curiosity. For a society that is used to packaged meat and processed dog/cat food, seeing real animals, lying dead, can be quite shocking. Still, I feel way more moved while staring at live cattle whose destiny is to be slaughter to our own pleasure, rather than having to deal with the already dead ones. 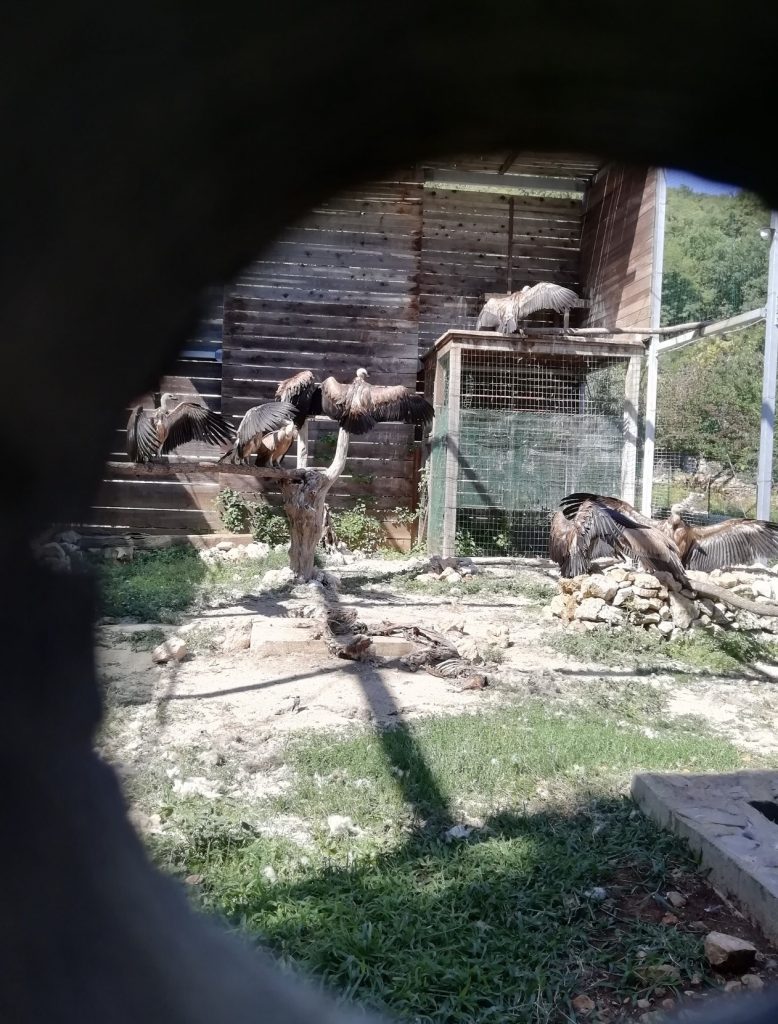 A big part of our stay in Beli revolved around these sheep, as well. And you can begin to imagine all the scents that relate to that! However, what you may not expect (as I didn’t) is how the smell change day to day. Saying that they smell like putrefaction would be an understatement, too superficial, as putrefaction evolves in a lot of different ways… Let’s see: just one day after they are killed, hordes of iridescent flies hover around, the decomposition starts, but still the faint iron smell from the blood can be perceived. Three days more, and you will face the leaking liquids and a stink that engulfs the world and eclipses the rest of your senses. However, the most interesting of the smells comes once the vultures have eaten the carcasses, and through the holes of the wooden wall that covers the front part of the aviary, one can watch the remains of tendon, bones and wool. Under the unmerciful August sun, they become dry, brownish-yellow, and a sharp scent lies in the air, reaching everyone’s nose. Well, imagine when it comes to clean it.

The aviary is not the only place where decomposition can be smelled. I also spent some lovely moments at the slaughterhouse and the feeding place. On the former, we pick up the remains that are not suited for human consumption: inwards full of fluids and faeces. Well, if there is a smell terribly hard to stand… That would be it. Those are carried to the feeding place, which purpose is to provide a source of food for wild vultures (with the decline of the extensive livestock farming, it gets harder and harder for them to find food). The feeding place, located on a high slope of the island, is an interesting area. Nice views over Cres, strong pestilence; the striking blue of the thistles shinning among the decomposed carcasses, dry bowels and severed sheep heads whose lifeless eyes face the indifferent sun. Countless ravens gather on the sky, and some vultures can be spotted, circling high above.

But not everything has been about the sheep and vultures! We were also in charge of the rehabilitation of some other species, like a Scop’s owl and a Eurasian jay, that needed to be fed and taken care of. The owl, that turned out to be quite picky, needed fresh meat – as fresh as it can get, as the slight trace of rotting would make it just gaze at you with its bright yellow eyes akin to someone high on peyote, and close its beak firmly. The jay on the other hand would have a more diverse diet, although its all-time favourite was dog food. Wet, smelly, disgusting dog food. And some cantaloupe melon, from time to time.

Nor was everything about feeding! As the name of the centre implies, I also underwent in a rescue operation. I was preparing a delightful pasta dish lunch when Tomi announced “Hurry up! We are going on a rescue mission!”. The spaghetti was left abandoned, and I ran to the car, that ran down the beach, from where Tomi and I ran to the little boat that ran over the sea. The motor roared and spread the smell of gasoline, as we passed by the cliffs and Beli got smaller and smaller at our backs. We kept going until we spotted a lonely young griffon vulture on the rocks close to the water (even if they reach the rocks after falling to the sea, it is not high enough for them to catch a flight back to the nest). Tomi jumped from the boat to the rocks and chased the vulture that, at this point, tried to run away, and a few meters aside, on the beach, a bunch of people sunbathed, completely unaware of the bearded tattooed man chasing a wet young vulture. Oblivious to our intentions, the bird jumped to the water, and so did Tomi. Some minutes after, he was back to the boat, carrying a soaking wet vulture. I was surprised by the smell of its feathers – it reminded me of that of my blue parakeets after having a bath. If you put aside some differences in size, behaviour, diet… Well, they are both birds, right? Perhaps a wolf and a chihuahua would smell the same when wet.

That was my first and only rescue operation. By the time I left the island, ten griffon vultures were in the aviary, the Scop’s owl had been released, and the jay, who by its own will decided to stay with us after being released, was jumping around requesting food. We left Beli Rescue Centre after the health check-up of the vultures, during which I had the opportunity of being so close to them that I felt how unexpected warm their bodies are. We left the village under the dark, the roads were empty, apart from the sheep that spread across them. A smooth shade of orange in the horizon announced the dawn, but I was so tired that I just fell asleep on my seat. The last smell I remember though, was that of own breath in the mask, before dropping in some dream about sheep and vultures.

/ Aida is a participant of the “Birds of a feather flock together” project implemented by the Association BIOM as part of the European Solidarity Corps program. /